It is about tracking behaviours, interpreting behaviours, designing desired solutions and delivering value to the customer and business. We have algorithms that turn into self-management, and software that makes decisions and gradually learns.

First and foremost, the internet is more than a browser

The internet is also your Facebook and Snapchat app, your Apple watch, and, very soon, your fridge. We currently consume almost 70% of all digital media on our mobile devices. At the World Economic Forum in Davos earlier this year, Sheryl Sandberg, COO of Facebook, explained to people that developing countries had simply replaced the concept of the “internet” with “Facebook”. They enter a store and say “I want Facebook”.

It started with Steve Jobs and the introduction of the iPhone in 2007. Jobs said at the time “This is a revolution of the first order!”, and he hit the nail on the head with these four words: “Internet in your pocket”.

These days people don’t surf the net, but increasingly tend to visit individual apps. Now almost 90% of the time we spend on mobile phone activities is on an app, and by 2019, 80% of all internet content will be video. This development has accelerated over the last 18 months. Facebook’s Instant Articles and “native video player” communicate news, Apple has introduced its Apple News and Snapchat’s Discover collaborates with newspaper offices, publishers and others to produce platform-exclusive content.

Facebook is perhaps the player that has made the biggest gains in this shift from web to “Walled Garden” platforms. Facebook’s growth in mobile earnings is also the result of the significant shift from advertising on the web to advertising on social media and mobile platforms.

Will live streaming become the next major content format?

In 2015, Twitter acquired the live-streaming app Periscope, which today is integrated with Twitter. This year we have seen Facebook push its Facebook Live and encourage celebrities and companies to use this technology. The New York Times recently wrote that Facebook Live is one of Facebook’s most high-priority initiatives. They are seeing an opportunity to bring the dynamics of live TV to the internet and simply democratise it. Anyone who has an iPhone with a Facebook app can now become a “live stream” star.

Internet of Things, IoT – Your most important ecosystem

Everything is connected in this new ecosystem. All our widgets communicate with each other. The Internet of Things goes much further than ensuring that your laptop, smart phone or watch are synched. Most installations in an ordinary household have already become a part of the Internet of Things, e.g. Google’s Nest programme, which includes smart thermostats, alarms and cameras. The idea is that all your units communicate in the same network. Today, marketeers are barely scratching the surface of what could be achieved with the IoT. For my part, I note that after I step off the bathroom scales I receive a notification from H&M, recommending boxer shorts one size bigger.

The World Economic Forum believes that a mature IoT will generate more than USD 14 billion by 2030. Cisco predicts there will be more than 50 billion connected units by 2020, while Intel claims the figure could be 200 billion. A two, followed by 14 zeros.

“Everyday we spent around three hours on our mobile phone, and we check it around 150 times a day”. 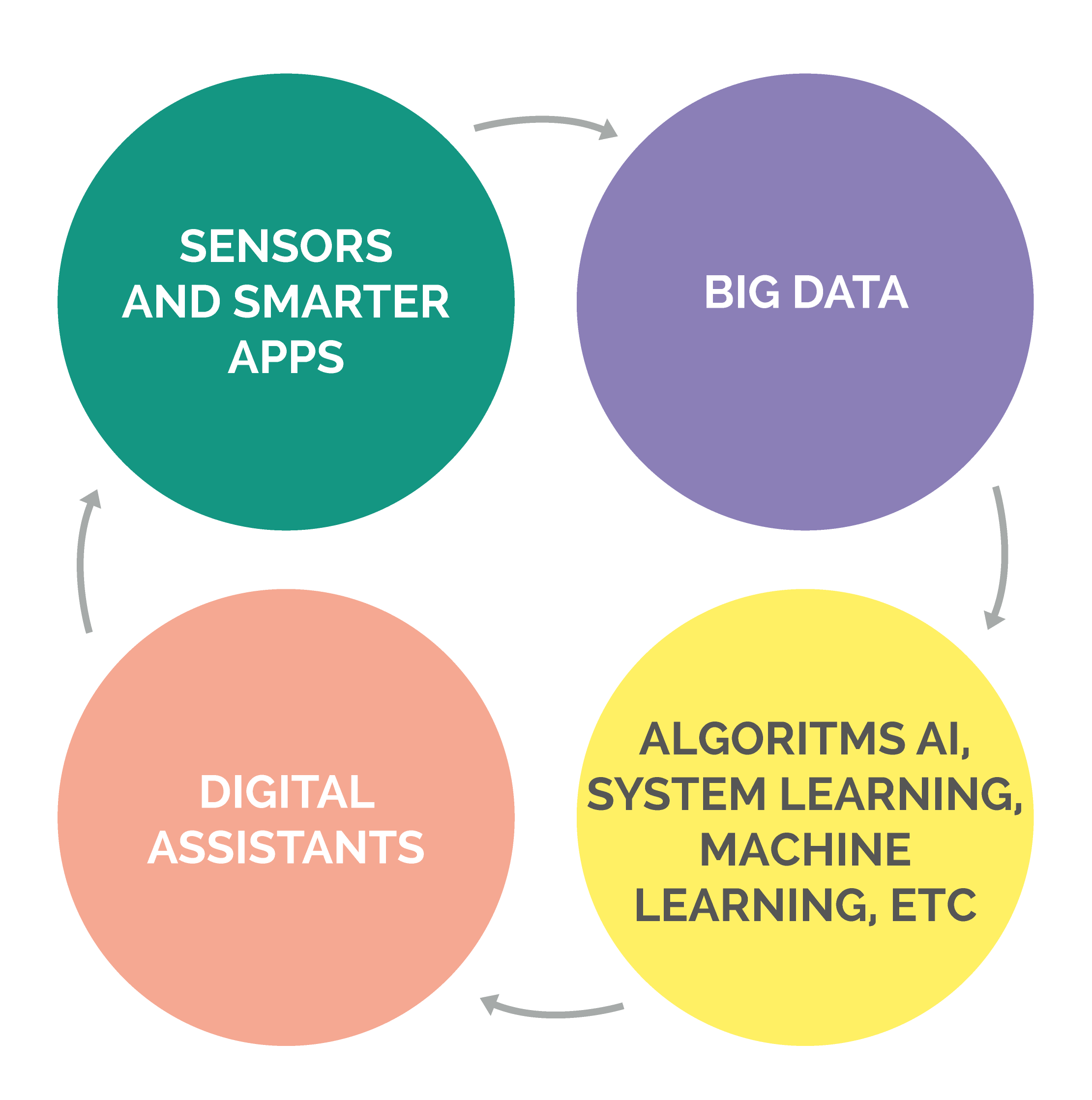 The global battle between the internet giants

What drives this trend is the battle between the internet giants: Facebook vs Google, Google vs Apple, etc. While Google's domains are the open web, Facebook and Apple have invested in an internet controlled by apps.

For you and other businesses that market products and services, this simply means more accessible data. Since the apps and sensors map everything we do, you can be assured of an extremely detailed customer profile. Frightening? Yes, but for companies that use the IoT universe, the opportunity for optimised shopping is pure heaven for data-driven marketing.

In China the most important internet platform is WeChat, in Japan it is Line, and in Korea it is KakaoTalk. In fact, along with Facebook Messenger, it is chat apps like these that dominate the market in most parts of the world. Snapchat has also recently marketed itself as a significant challenger and an app that “everybody must have”, together with LinkedIn, Instagram, Twitter and WhatsApp. The last-named was acquired by Facebook, just to be on the safe side.

When it comes to Messenger, it is about far more than content. Both KLM and Über have already integrated this app into their customer dialogue.

By using these platforms, companies establish a personal conversation thread that becomes eternal. The technology in the app ensures that you will always know the history and context of a customer relationship, and the user experience becomes seamless and characterised by the removal of all friction.

The internet is still in its initial phase, and 5G will revolutionise the way we use it

Smart phones didn’t really take off until 4G, and “Wi-Fi everywhere” means that we now use our mobile phone as our own portable internet platform. Over the course of a couple of years, 5G will kick-start the next phase: virtual reality (VR) and alternative reality.

If you have tried this out already, it was probably with Google’s Cardboard, Facebook’s Oculus or Samsung’s Gear. Regardless of whether you loved or loathed it, you can be assured that you still have a lot to look forward to over the next two to three years. Just like with the first smartphones, VR headsets are currently just precursors to what the industry hopes will revolutionise both communication and entertainment.

This is where the alternative or expanded reality comes in: augmented reality, AR. According to the Wall Street Journal’s technology columnist Christopher Mims, AR is to VR what the mobile phone was to the desktop. It's something that is always there, rather than something you use now and then. AR is similar to VR because it involves technology you “wear”, apart from the fact that with AR it means that what you see is broadcast to the world around you. Even though the AR initiative Google Glass came a little early and crashed, we will see the giants jump on the bandwagon with new inventions. Facebook founder Mark Zuckerberg asserts that AR could change the world as radically as the smartphone and has already designed a prototype for his AR glasses.

But even if Facebook and others believe that AR and VR will replace television and perhaps also the mobile phone, we think it is wise to be cautious in assessing the future use of AR and VR based on what we currently perceive as challenges and opportunities within communication. When you think about where people read, view and listen to information, i.e. where you have to be present, Facebook is very well placed in the western world. Messenger will have one million users in the course of a couple of years, and Facebook has guaranteed a plan for how both users and marketeers will be able to utilise this. Not least, news media is experimenting with different ways of communicating news via “messaging”. For example, via Snapchat Discover. Facebook hopes Messenger will become the most utilised tool for trade and customer service, and Facebook-owned Instagram is already very popular among marketeers.

TV will not disappear, but digital advertising revenue will already surpass TV revenue during the course of next year. During 2020 we will witness the next wave of the digital revolution: an internet that is present in all devices, in people’s heads and in mobile and social channels, not in web browsers. Make sure that you are an early adopter of these trends.