Knowit developed the app that ensured distancing at the office 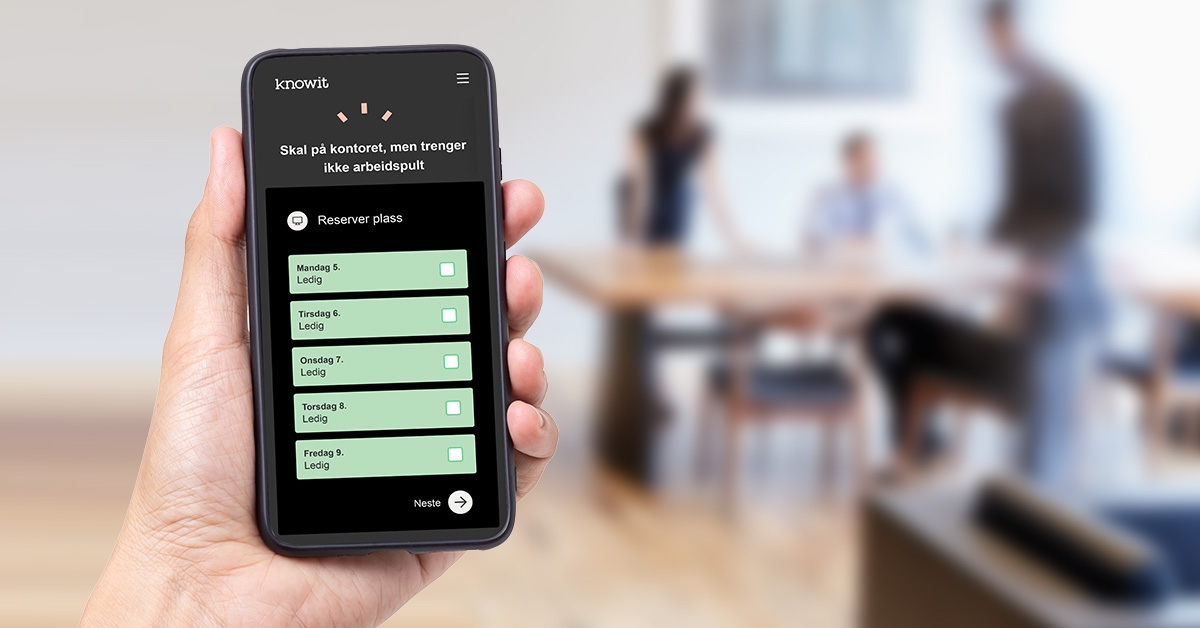 We are still living in a time when we have to avoid being too many coworkers at the office at once. Still, many of us want to have the possibility to come into the office maybe once a week when necessary or because we miss interacting with our team. How can you ensure that there aren’t too many people in the office at the same time? Knowit Experience in Bergen developed the app that solved this problem.

To avoid there being too many employees on site at once in the offices in Bergen, the 200 local coworkers were asked to book a desk in advance using an Excel sheet. Only 50 people could be at the offices at any given time, to ensure distancing and avoid spreading the virus.

“Many of us found the Excel sheet a bit difficult to use, and it was also hard to figure out which desk you had actually booked for the day. Simply put, it wasn’t a great platform for this kind of application,” says project manager Camilla Kjeseth at Knowit in Bergen.

An alternative solution proved to be a success

This got people thinking about an alternative solution that could simplify booking of desks for the people who wanted to come to the office and that could also show which desks were available. At the same time, the solution would have to give a complete overview of how many people were at the office or were planning to be there, in order not to exceed the number of employees that could be there at once, to ensure distancing and help people feel safe.

“Since quite a lot of people missed coming in to the office, we saw value in investing some time on developing and identifying a simple solution for booking desk space, which could also give us a good overview, to ensure that there weren’t too many people in the office at once. Our designers and developers created the ‘Bookit’ app, a solution that shows the user where there are desks and when they are available or if they are booked. The app also calculates how many employees there are in the office and signals when it is full. The solution has been greatly appreciated among employees. In the future, we will expand the app so that it is also possible to book a parking space if needed,” says Knowit’s Camilla Kjeseth, project manager and one of the driving forces behind Bookit.

At first, the app was intended only for internal use, but the developers soon realized that the solution was a very good idea that other companies might be interested in and need. A number of other companies have already gotten in touch and shown an interest in similar solutions.

“The time that passed between when we started work and when the complete solution was deployed was very short. It took just three weeks to get it done, which felt great,” says Caroline Wågsæther, UX designer at Knowit and one of the people who took part in the project.